The emergence of Geographic Information Systems has led to a renewed focus on the importance of place in crime research. A large body of research has tested how the presence of spatial risk factors, such as liquor establishments and multi-family housing complexes, influence crime patterns. This literature is influenced by Environmental Criminology, a family of theories with common interests in the situational aspects of crime. Tangential to this research, an extensive literature has measured the effect of neighborhood-level characteristics on crime and victimization. This literature is largely informed by Social Disorganization theory, which postulates that certain neighborhood characteristics, such as poverty and geographic mobility (i.e. residents frequently moving to or from a neighborhood), disrupt social order to an extent that weakens ties between neighbors, creating an environment ripe for crime.

The current study focuses on the intersection of Environmental Criminology and Social Disorganization through a spatial analysis of Motor Vehicle Theft (MVT) and Motor Vehicle Recovery (MVR) in Colorado Springs, CO. Both MVT and MVR were included in recognition of their related nature. MVR, while considered a crime in itself by law enforcement, can be considered the final step of an MVT. The offender, after receiving the desired benefits, abandons the vehicle. For crime analysts, the MVR presents an additional opportunity to analyze offender behavior and decision-making. 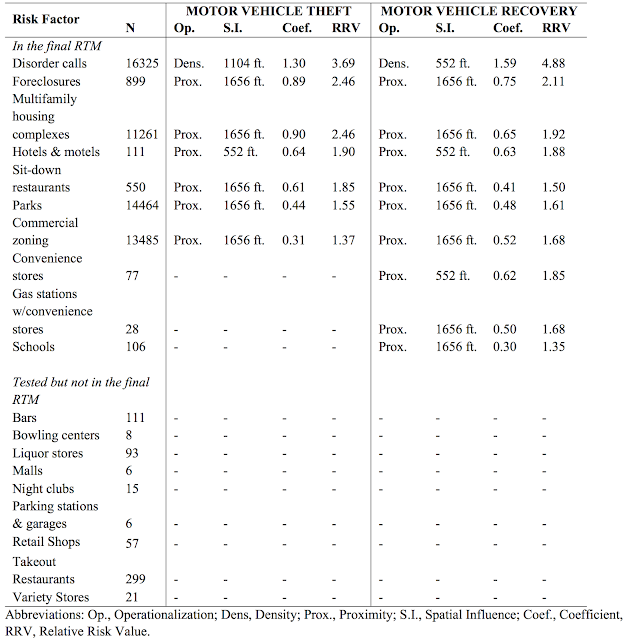 Following the RTM analysis, we measured whether the spatial influence of each significant risk factor differed across neighborhood context. For each significant risk factor, we measured whether its spatial influence overlapped with a neighborhood that had high, low, or average levels of social disorganization, as measured across six variables: poverty, population density, number of residents with a high school diploma (or equivalent), geographic mobility, young male population, and racial heterogeneity. 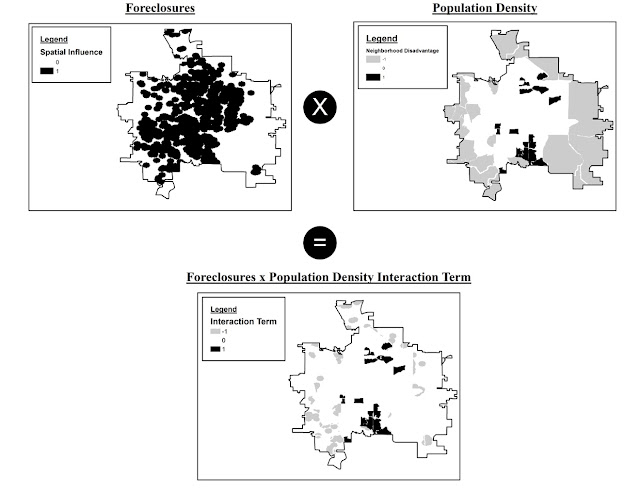 The effect of each significant risk factor was associated with heightened levels of MVT and/or MVR in certain neighborhood contexts and lower levels in others. This suggests that the convergence of particular spatial and neighborhood-level factors may maintain or heighten criminogenic effects, while the convergence of other factors may result in a null or mitigating effect. For the crime analysis community, the findings suggest that Environmental Criminology and Social Disorganization should be seen as complementary, rather than competing, theoretical perspectives.
Posted by USJ Editor at 03:42