The Spatial Dimension of US House Prices


House prices spill over from one region to another region. This is analysed in the literature and is known as the ripple effect. But when I plotted quarterly house price data over time for 319 US metropolitan statistical areas, I noticed that these spillovers do not seem to be uniform across space and time. When looking at this graph it is easy to see that in coastal regions rising house prices are transmitted to neighbouring regions, while this does not happen inland.


Using non-linear estimation techniques I analyse whether house price spill overs are uniform across space and time. I find that house prices spill over more when house prices are increasing then when house prices decline.
I wondered where such a result could come from and discovered in the behavioural literature the disposition effect (Shefrin and Statman, 1985), which reflects the phenomenon in financial markets that investors sell their winning stocks too soon and hold their losing stocks too long. The disposition effect also holds for the real estate market and implies a market slowdown in times of decreasing house prices. Sellers confronting losses are likely to set higher list prices. If buyers are unwilling to pay these prices, houses stay on the market for a longer time. Homeowners could decrease list prices, but instead delay selling in order to avoid nominal losses. This behaviour reduces the transaction volume in the housing market and, consequently, limits house price spill overs.
The key question arises as to why do sellers set higher list prices and delay selling when they are confronted with a loss.
In the behavioural economics literature there are several concepts that may provide an explanation. The concept of mental accounting, for example, means that individuals group elements of their consumption and expenditures in mental accounts. They follow their personal rules in managing those accounts. When homeowners hold on to their losing asset, it is because in their mental account the loss is only booked when the asset is sold. This means that, if migration, as a driving force of house price spill overs, slows down due to loss aversion, spill overs should also decrease. Another potentially relevant concept is cognitive dissonance, the mental conflict that occurs when people find evidence that their beliefs are not true. People experiencing cognitive dissonance try to trivialize or avoid the new information, developing explanations as to why their current beliefs or assumptions should not be revised. For the housing market this would mean that homeowners avoid the information of declining house prices or try to find explanations as to why this decline does not apply to their home. Thus, they will not reduce their asking price even when confronted with falling house prices in the region. This behaviour should be reflected in smaller house price spillovers.
My analysis shows that it is not appropriate to assume that house price spill overs are uniform across space and time. In times of declining house prices spill overs are much lower than what linear estimations suggest. This result can very well be explained by taking into account seller’s behaviour. 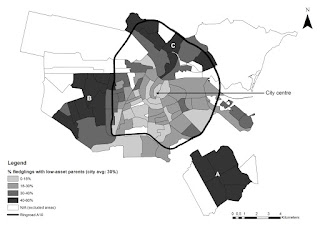 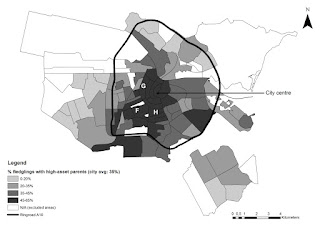 Source: Hochstenbach & Boterman (2015); own adaptation of CBS/SSB data.
Posted by USJ Editor at 04:15 No comments:


Both our theories of human behaviour and people’s relationship with place suggest that surveillance poses an intrusive force. The experience of home relies on privacy and the absence of surveillance. Home is, or at least is idealised as, a place where we can experience the freedom to live of our own volition. As a place of privacy home is juxtaposed to the city; in the modern city surveillance is omnipresent. Home is positioned as a refuge from the fluid and monitored spaces of our cities.


Theories about home, privacy, and our expectations of being free from surveillance are intuitively appealing. Although children are supervised by parents and significant others, as adults we expect to live as we choose and without scrutiny at home. Home is a place where we can do what we want, including inviting and restricting visitors as we see fit. Indeed, violence and oppression experienced in the home violate our normative expectations that home is a place of peace and order where we can exert control.


The significance of home as a place free from surveillance, on the one hand, and new models of supportive housing that purposefully adopt surveillance mechanisms, on the other, motivated the research driving my article. I wanted to examine the function of surveillance. In the research I sought to empirically study how tenants experienced surveillance, and how housing and support providers understood the role of surveillance in the lives of those monitored.


The research identified two key findings. First, and consistent with existing theories, surveillance was controlling and restrictive. Tenants experienced, and housing and support providers advocated for, surveillance to intervene to restrict freedoms and to protect vulnerable people. It was recognised among tenants and housing and support providers alike that surveillance is counterproductive to achieving independence and self-determination.


Second, the research found that instead of simply being passively subject to surveillance, tenants purposefully used surveillance for their advantage. Surveillance in supportive housing was a resource actively used by tenants to create the conditions to control their lives. Tenants saw surveillance as playing a desirable role. Surveillance, as provided through the concierge and onsite support workers, meant that tenants could achieve safety and security by minimising the threats posed by others. Tenants used surveillance to restrict unwanted visitors. Contrary to what may be expected based on theories of home as a place of privacy, surveillance was a resource that tenants drew on to exercise control and autonomy over how they lived.


The research’s contribution is to demonstrate the desirability and utility of surveillance in supportive housing as a mechanism to achieve safety and control for tenants who had otherwise experienced violence and marginalisation in mainstream housing and as homeless. For people who had experienced unsafe neighbourhoods and forms of accommodation – for people who were unable to draw on informal resources and networks to achieve safety and control – formal surveillance constituted a useful resource. Although surveillance acted to limited autonomy, it was also used as a resource that enabled people to exercise control. Surveillance is thus not the antithesis of home.
Posted by USJ Editor at 08:28 No comments: