Watching TV the other night, the advert below came on. It reminded me of Craig Gurney’s (1999) paper on how the UK state (and society) has acted to normalise home-ownership in the UK through imbuing home-owners’ dwellings with warmth and security, associating home-ownership with a set of values that constitute a ‘good citizen’, and portraying home ownership as meeting a deep and natural desire for independent control. Almost two decades later, and despite declining rates of home-ownership, these discourses are still evident in the advert below: in the mother, happy at ‘being able to say “this is mine” as she paints her front door; and in the father, nodding proudly to his children, and to “their future”. One of the main purposes of our study was to quantitatively examine what this normalisation of home-ownership means for the subjective well-being of home-owners, and renters. 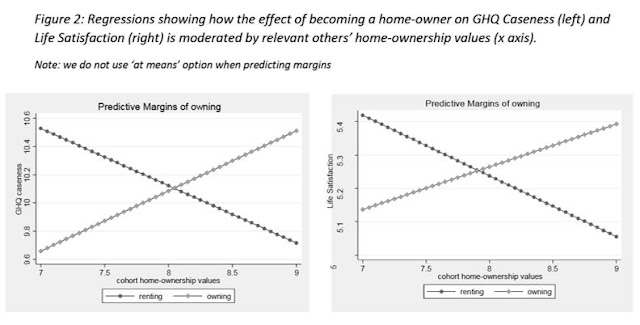 In sum, our findings suggest that being a home-owner carries social status. This social status (as opposed to autonomy or security) may partly explain why some studies have found home-owners to have higher subjective well-being (e.g. Zumbro, 2014), ontological security (Saunders, 1990) and better educational outcomes (see Dietz and Haurin, 2003) than renters. It may also partly explain why home-ownership aspirations are so strong in the UK. Policymakers and researchers should explore (or at least account for) this social status pathway. Otherwise, they risk overlooking the possibility that some of the apparent benefits of home-ownership may in fact depend on the stigmatisation of others.