During the early stages of the 20th Century’s Italian fascist movement, squads of young men, proselytised by Mussolini’s political vision that saw violence as ‘history’s wheel’, engaged in vicious attacks on socialist and leftist organisations throughout the country. These men wore black shirts and they metonymically became known as Black Shirts (Falasca-Zamponi 2002). Wearing the black shirt in 1920s Italy signified a revolt against the vestimentary culture of suits and top hats worn by the political and economic elites. However, as an expression of revolt, wearing the black shirt went beyond a material representation of political opposition. For the leaders of Italian fascism, the semantic power of this everyday garment spoke of a ‘world to come’, of a homogenised unitary body of citizen soldiers. Following Michel Foucault’s (1980: 39) notion of ‘biopower’, where “power reaches into the very grain of individuals, touches their bodies and inserts itself into . . . their everyday lives”, the black shirt and other sartorial expressions of fascist politics are concerned with regulating male and female bodies. Binary understandings of rural and urban played an interesting and crucial role in enacting this form of biopolitical policing. 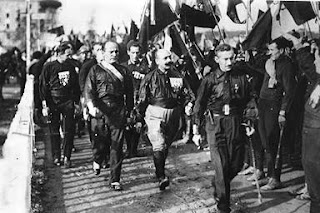 For the fascists, bourgeois materialism saw happiness being equated to individual desire expressed through bodily needs (ibid). The individualising effect of this on Italian citizens was, for Mussolini and cohorts, unacceptable. In the 1932 Doctrine of Fascism, Mussolini and co-author philosopher Giovanni Gentile wrote: “The world is not this material world that appears on the surface, in which man is one individual separated from all others and is governed by a natural law which instinctively leads him to live a life of egoistic and temporary pleasure” (Mussolini 2012: 9). Quenching individual desires was integral to fascism’s totalitarian vision. Individualism was to be supressed by controlling the most intimate of individual concerns – the body. Sandro Bellassai (2005) writes:

[…] proud in his uniform, the Italian man of fascism was involved in paramilitary discipline since youth, encouraged to build his muscles through morning athletic exercises, and immersed in a spoken and body language that was military, uncouth and virile (Bellasai 2005: 330)

The black shirt played a crucial role in defining the identity of the masculine military subject. Wearing it in civilian life was to induce the dual effect of erasing people’s differences and creating a warrior-like body politic. To don the black shirt, to march side-by-side with your fascist brothers, was to abnegate personal desires and if need be make the ultimate sacrifice for the nation. “The fashioned body”, Falsaca-Zamponi writes, “was being turned into a fighting one” (2002: 152).

The modern metropolis played a critical role in constructing the mythical identity of the Black Shirts. Like so many other writers on the city, fascist political commentators constructed the rural and the urban in binary terms, with the former mythologised as the organic national community where the virility of the nation was most potent. Grandiose praise of the rural population as the heart of the nation belied Italian fascisms concern with maintaining a feudal order in the countryside. The founding members of the Black Shirts included young landowners opposing progressive peasant movements and right wing labourers’ unions with an overtly anti-plebeian agenda. Nevertheless, the rhetoric of fascist ruralism was a powerful propaganda tool used to denigrate city life, which the fascists saw as nurturing bourgeois excess as well as a range of ‘modern’ freedoms associated with socialist political movements and women’s liberation. On the topic of fascist gender politics in the context of the urban/rural divide, Bellassai writes:

Women above all considered the flight from the countryside an opportunity to escape from rigid patriarchal control. In 1935 the provincial party secretary of Modena wrote: ‘The young people who marry are anxious to break away from the family and make their own families because the young wives are intolerant of the discipline of the reggitore  [head of the agricultural family] and want to move to the cities so as to have greater opportunity to enjoy themselves (2005: 319).

This romanticized femininity runs counter to the image of the newly urbanised women presented in the Bellassai quote. The city offered Italian women new experiences and opportunities, which amongst other things resulted in declining birth rates (Bellassai 2005). This was a threat to a political movement that saw women first and foremost as producers and nurturers of citizen-soldiers. The city, then, was a threat to the virility of the nation. The Black Shirts’ presence in Italian urban centres can be seen metaphorically as a dark shadow enveloping the pleasures and freedoms of the city – ‘freedoms’ which the 20th Century Italian fascists associated with, in part, an emerging and threatening femininity.

Mussolini B (2012) The Doctrine of Fascism, CreateSpace Independent Publishing Platform